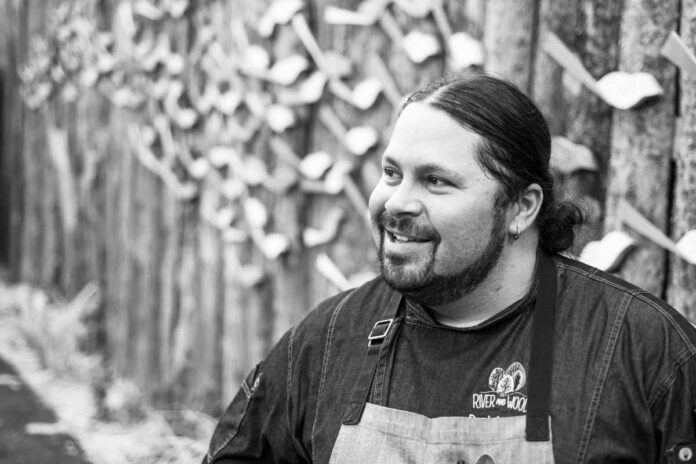 Daniel Asher, chef-partner at Boulder’s River and Woods, Denver’s Ash’Kara, and Barrio75 in Ketchum, Idaho, is sustained and inspired by his vision for the planet and the work of fellow activists.

My mind goes to that scene in The Breakfast Club when Anthony Michael Hall’s character is pressed to define, “Who am I?” The definitions hover—chef, restaurateur, employer, father—everything attached to a role, an expectation. But strip those away, and what’s left is simply this: human. We’re all just humans, zipping around the planet, trying to find shelter, food, love, and a sense of purpose.

Last summer during the Slow Food Nations conference (remember those?), my path intersected with Anthony Myint, an award-winning chef-restaurateur turned carbon farming advocate. The effects of carbon are no longer a revelation: In the atmosphere, it’s a major contributor to climate destruction; in the soil, it increases fertility and water retention and limits the need for chemical fertilizers. In the simplest terms, carbon farming utilizes a diverse methodology of growing and ranching practices to sequester CO2 in the earth (where it’s healthy) rather than it escaping to the atmosphere (where it’s not).

Sustainability. We’ve buzzworded it into meaninglessness. But it’s not meaningless.

Sustainability. We’ve buzzworded it into meaninglessness. But it’s not meaningless. It’s not just a satire of woke culture on Portlandia. It is quite literally the difference between life and death. At a time when we’re all fearing the loss of the very things that define us—when we’re confronted daily to reassert our “why”—I am reminded that our calling is to feed people. In so doing, our responsibility is to help ensure that’s possible now, tomorrow, and into the next generations.

For myself, beyond the basic restaurant model, there exists a desire to accomplish more: to inspire curiosity and create change within those 90 minutes I have with a stranger at my table. Over the years, my advocacy has been focused on plant-based cuisine, sustainable local food systems, promoting organic agriculture, combating food waste, and debating why there is such an imbalance of food equity causing millions of people daily to live with food insecurity. This is all good work, and it is deeply meaningful to me. Yet, after more than two decades of advocacy, less than two percent of the land in America is organically farmed, heirloom vegetables and pasture-raised proteins are too expensive for 90 percent of our own communities to afford to eat, and the actual business model of running restaurants is in itself an exercise in madness. We haven’t moved the needle.

A few minutes into our very first conversation, Anthony mused, “Delaying the inevitable isn’t exactly the best marketing slogan, so let’s dive into the power we have to promote good farming. Saving the entire planet can come down to restoring the soil a few acres at a time.” He had an intense expression and carried a copy of the book Drawdown, and I quickly realized that this conversation was going to shift my perception of how to use restaurants as a medium for change. Anthony introduced me to Zero Foodprint (ZFP), a nonprofit effort to have restaurants crowdfund grants (via a one percent surcharge on checks) to help farmers switch to renewable practices. Healthy soil, he said, could sequester all the carbon humans emit every year. And it’s doable.

…Our calling is to feed people….Our responsibility is to help ensure that’s possible now, tomorrow, and into the next generations.

In the year that followed that first meeting, a lot of things happened in the world. You know, global chaos and such. But meanwhile, Anthony received the Basque Culinary World Prize for utilizing gastronomy as a transformational motor of change—and the James Beard Foundation named the ZFP program Humanitarian of the Year. He launched a collaboration with the State of California to scale regenerative agriculture. More than 100 restaurants participated in San Francisco Restaurant Week, with one percent of revenues going to fully vetted carbon farming initiatives.

And using that momentum, Anthony has navigated into a partnership with Mad Ag, a Boulder-based nonprofit that aims to “reimagine and restore our relationship with the earth through agriculture.” ZFP has aligned with the cities of Denver and Boulder and multiple regional agencies, and the organization is poised to “go all-in, and create a focused, systematic change mechanism instead of just advocating for different choices in the broken food system.” Anthony is turning that approach on its head. “Historically,” he says, “the good food movement has been about getting people to eat the $20 burger instead of the $1 value menu burger. Instead, we need to get an extra few cents per burger to enable farmers to scale to regenerative agriculture.”

These changes can be massively impactful. A recent study on a section of livestock ranch in Marin County showed that carbon ranching on 600 acres, a single mid-sized ranch, could sequester enough carbon to recover the CO2 emissions from more than 258,000 gallons of gasoline. There are more than 770 million acres of range- and grassland in the U.S. alone.

We all know that everything about our food system—all the way from the farm to the table—is broken.

I love Anthony’s brand of functional rebellion, and it inspires me to demand more answers. We all know that everything about our food system—all the way from the farm to the table—is broken, and it sure feels like now is the time to address some fixes. We’re not likely to change a profit-driven model to one of social justice on any kind of scale, but while the system is gutted, we may as well do some renovation. Maybe we can’t change the feedlot model by wagging a finger at it, but we can add compost to the land the cattle are raised on before they enter the feedlot. Solutions are the easy part; scientists and agroecologists have them at the ready. The hard part is getting buy-in from large corporations that basically need someone to prove to their board of directors that doing these things can be publicly beneficial and profitable.

As I talk to Anthony about including the ZFP surcharge and messaging at my restaurants, I try to push for some vulnerabilities in his theories—something, anything, that has not been clearly contemplated. “Anthony, where did this materialize? How did cooking become so complicated and why, in the midst of the current hospitality implosion, should we worry about something else that’s going horribly wrong?” He parleys effortlessly, saying, “Project Drawdown demonstrated that we can reverse climate change at a cost of only one percent of our gross domestic product, with the positive impact to our healthcare system and overall planetary wellness in the trillions of dollars. Why wouldn’t we use our restaurants as an immediate lifeline for those projects?”

I believe in my soul that we are all inextricably connected. By doing everything we can to ensure that our planet is covered in fertile, vital, biodiverse soil, we are helping to create a living web of nourishment that literally sustains everything. I can’t really think of anything more inspiring, or a better way to frame the importance of the work we do in our kitchens. I, at once, feel overwhelmed, anxious, and eager to get busy. Thanks, Anthony, for redefining why the hospitality industry is where I have immersed myself for 28 years.

He leaves me with this: “If legitimately being part of the solution is this easy, then why not? We’re assuming our guests, like us, want to be part of the solution. It’s on us to take care of them, and to make it easy for them to support local climate solutions. It’s $1 on a $100 check. Guests can always opt out. But the system is too broken to perpetuate business as usual. We need a new normal. One percent seems like a small price to un-fuck the planet.”

Zero Foodprint launches in Denver and Boulder with its first round of member restaurants this fall. Bin 707 Foodbar in Grand Junction is already actively contributing to the program. It costs nothing to be a part of Zero Foodprint, and the potential returns are profound. While we’re fighting for our own sustainability, we may as well fight for the earth’s. To learn more, visit zerofoodprint.org.

What is your “why”? Email your experiences (and thoughts, opinions, and questions—anything, really) to askus@diningout.com.

The Great Big Why: Tony Zarlenga

The Great Big Why: Joe Ouellette

The Great Big Why: Brother Luck